The 20th annual Saskatchewan Waste Minimization Awards ceremony was held on April 21 in Regina as part of SWRC's ReForum conference. Thanks to SaskTel for sponsoring the awards.

On hand to assist with the awards presentations was Hon. Herb Cox, Minister of Environment and Greg Hern, SaskTel's Environment Manager. 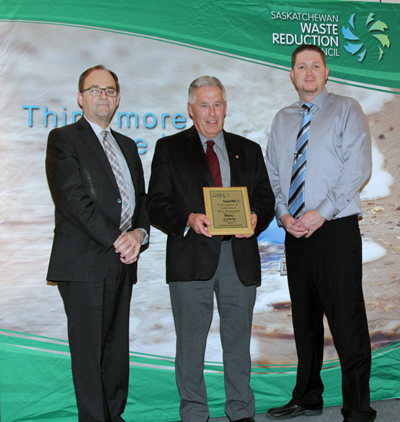 Wally Lorenz’ contribution to waste reduction in Saskatchewan spans more than 20 years. Wally was one of the pioneers of regional waste management and helped establish the West Yellowhead Resource Waste Authority (WYRWA) in the early 1990’s. WYRWA went on to be one of the founding members of the Association of Regional Waste Management Authorities (ARWMAS), of which Wally is currently the Chair.

Wally’s commitment to public service is reflected in his 15 years as the Mayor of the Town of Wilke, and his leadership of ARWMAS. Under Wally’s direction, ARWMAS has grown from six regional waste management authorities to 18. The organization now represents 268 municipalities and ARWMAS members have diverted more than 100,000 tonnes of waste from landfills over the past 10 years.

The face of waste and recycling has changed over the past two decades. Wally has been a persistent, constantly-present force that has driven economic and environmental sustainability to waste regions across Saskatchewan and beyond. Wally Lorenz’s leadership and commitment is evident in the quality of sustainable, environmentally sound programs that have emerged over the past 25 years.

PV Waste Solutions is a family-owned-and-operated disposal, composting and soil remediation company servicing Regina and surrounding area. What began as a family business in 2009 with one truck and 11 bins is now a diverse organization that specializes in disposal bin rentals, scrap metal recycling, soil remediation, and composting.

PV is involved in a number of partnerships that have significantly reduced waste in Regina and surrounding area. These include a partnership with the City of Regina for their Leaf and Yard Waste pilot project, and one with D&R Roofing, diverting asphalt shingles for use in building roadways and dust control. PV owns their own Bandit Beast 3680 recycler, which allows them to chip, mulch and shred material for composting, landscaping, animal bedding, and for use as an industrial absorbent.

PV Waste Solutions’ passion and enthusiasm for waste reduction shows throughout Regina and surrounding area as they continue to be a leader in organics diversion.

For the past 25 years, Envirotec has shown that success in business and success in environmental stewardship do not need to be mutually exclusive. Envirotec’s Household Hazardous Waste (HHW) events help to ensure that communities can safely dispose of items which can be harmful in municipal landfills. Dozens of Saskatchewan communities have trusted Envirotec to divert and recycle household hazardous waste materials such as acids, asbestos, batteries, cleaners, corrosives, mercury, fertilizers, solvents and more. In 2015 alone, approximately 143,000 kilograms of HHW were diverted from entering Saskatchewan landfills and waterways.

Envirotec’s services include septic collection and environmental emergency response. They have managed the safe treatment and disposal of 230 million litres of septic waste since 2009 and respond to approximately 50 major emergency spill situations every year. In addition to this, Envirotec is an important partner for two of Saskatchewan’s stewardship groups: SARRC and Product Care. Together, they have safely collected 130 million litres of used oil, and 2 million litres of latex and oil-based paints for recycling. 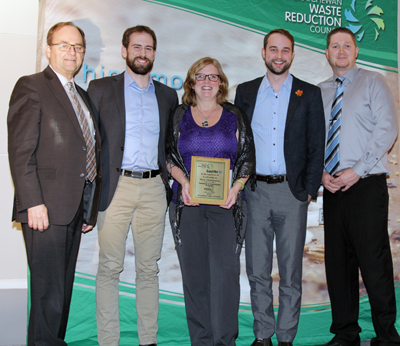 In 2015, EPRA Saskatchewan created the “Takeback to Touchdown” contest which encouraged Saskatchewan residents to recycle their end-of-life electronics (EOLE). The promotion harnessed the power of the huge and passionate Roughrider fan base to give them a new way to “bleed green”. EPRA asked fans to bring back their EOLE to the nearest EPRA Saskatchewan SARCAN depots where they were given a limited edition Rob Bagg trading card that contained a secret passcode. Each card could be used as an entry into the promotion at takebacktotouchdown.ca.

Takeback to Touchdown was a huge success which saw double-digit increases in takebacks in some communities. In the end, 30,000 Roughrider fans from 300 different communities recycled their end-of-life electronics – saving 30,000 devices from landfills. EPRA Saskatchewan and the Saskatchewan Roughriders partnered to bring awareness of Saskatchewan’s electronics recycling program to a much wider audience, resulting in a tangible impact on e-recycling in the province.

In 2012, North Battleford disposed of 392 kg/capita of waste, 53% higher than the national average. In addition, the City’s unsupervised recycling depots were being misused. Based on an in-depth consultation process with the administration and residents, the City decided to implement a blue bin curbside program for all the residents.

The new recycling program began on Earth Day, 2014 and has been a success from the very beginning. Part of its success is due to the comprehensive communications plan that was launched by the City, including open houses, news articles, flyers and pick-up day reminders.

The city-wide recycling program reduced waste by 37% in the first year alone, and an additional 17% in the program’s second year. Increased awareness of recycling in the City has also had a positive impact on organics diversion: since the recycling program’s launch, materials dropped off for composting at the Waste Management Facility have increased by almost 200%.

The Saskatchewan Roughriders, the City of Regina, and the North Central Community Association have joined forces and created The Go Green Program. This partnership facilitates the collection, sorting and recycling of hundreds of thousands of beer cans and other recyclables each football season. The program was started in 2007 and has seen great success over the past nine years.

Together, the partnership collects and average of 300,000 cans and bottles each year, reaching as many as 550,000 containers during the 2013 Grey Cup season. This amounts to over 3 million containers to date. North Central uses 70% of the funds from the collected cans for wages for over 50 workers who help out at each game. Last season, the partnership created 2,000 hours of employment in the community, involving many people who are unemployed, unemployable, or under employed, and providing valuable work experience to youth workers.

The funds are also used to pay for murals and community cleanups. Artists and community members are recruited to paint murals in the community to showcase local artistic talent, to clean up a wall that has unwanted graffiti on it, and to prevent future instances of graffiti.

Back to Main Awards page